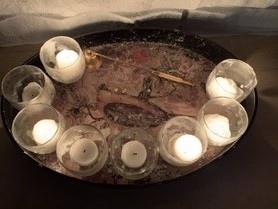 King Alexander defeated Demetrius for control of the Syrian Empire. Both men sought Jonathan as an ally. But Jonathan sided with Alexander.

At that time, Ptolemy was the king of Egypt. So, Alexander asked Ptolemy for an alliance. He also asked Ptolemy’s permission to marry his daughter. So, Ptolemy agreed. And he brought Cleopatra to Alexander. They met in the city of Ptolemais.

Immediately, King Alexander asked Jonathan to come to Ptolemais. And so, Jonathan arrived with expensive gifts. In return, Alexander honored Jonathan and confirmed his authority over Judea.

King Demetrius had a son also named Demetrius. After Alexander’s victory, Demetrius the son returned to Syria from Crete. And he immediately claimed the throne of his father. At the same time, he made Apollonius his governor over Palestine.

Apollonius quickly formed an army. And before very long, he positioned his forces against those of Jonathan. With great determination, Jonathan moved his forces into position near Joppa.

In order to provoke a reaction, Apollonius sent a message to Jonathan. In this message, he called Jonathan a coward. The Maccabees had fought a guerilla war in the mountains of Judea. So, Apollonius claimed that the Jews were afraid to meet his army in the plains.

Jonathan refused the bait. And he didn’t make a rash decision. Still, Apollonias’ message made clear that he would have to fight.

What Apollonius didn’t realize was that Jonathan’s army was much better prepared than in the past. So, Jonathan took deliberate positions for maximum advantage near the coastal city of Joppa.

Life will bring all sorts of unanticipated and unanticipatable circumstances. So, learn to trust God. In life, this is the only way to be truly prepared.

“Therefore, stay awake, for you know neither the day nor the hour” Matt 25:13