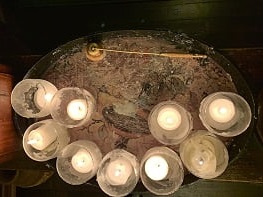 Tobit and his wife Anna worried that Tobiah had been killed. They feared the worst because he did not return from his journey on time.

However, at the very same time, Tobiah was actually at Raguel’s house in Ecbatana celebrating his marriage feast. While on his journey, he had suddenly decided to marry Sarah. And so, he was detained because the feast lasted a full fourteen days.

After the feast was complete, Raguel pleaded with Tobiah to stay in Ecbatana. But, Tobiah begged to be released to return to his parents in Nineveh. So, he departed with Sarah and Raphael and their servants.

Tobit’s father-in-law and mother-in-law genuinely wanted what was best for the newly married couple. And so, they gave generously to the new couple. But they respected their independence. And they wanted the best for both families.

There is an old expression that says, “A marriage is between two families”. This is the potential power of of love. Not that two people are attracted to one another, but that two families could agree to focus their attention and effort for the common good of a newly married couple.