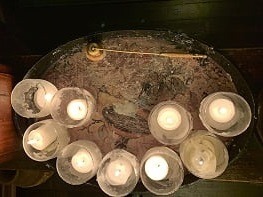 Tobiah and Raphael set off on their journey to Media. Along the way, the stopped to camp at the Tigris River. While there, a large fish attacked Tobiah.

The fish attempted to swallow his foot. Although Tobiah cried out in alarm, Raphael told him to grab the fish and haul it to shore. Furthermore, he instructed Tobiah to clean the fish for food. And, he told him to retain the heart, liver and gall bladder. Later on, he told Tobiah that the fish innards would be useful as medicine.

Finally, as the two men neared the city of Ecbatana, Raphael told Tobiah about Raguel’s daughter Sarah, who lived in the city. Specifically, he described Sarah’s beauty and courage. And Raphael mentioned that, Tobiah had the first right to marry Sarah. This right came because Raguel was a near relative.

A fish attacked Tobiah and attempted to swallow his foot. As startling as it was, he could have interpreted it as nothing more than an odd coincidence.

But , Raphael informed Tobiah that in reality, the fish was a great resource for food and for medicine. It was a gift that he hadn’t even asked for.

God is sovereign over the affairs of men. As it is written, “[There is] No wisdom, no understanding, no counsel [that] prevail against the LORD” (Prov 21:30).  And, “we know that all things work for good for those who love God, who are called according to his purpose” (Rom 8:28).

Sometimes the best way to see coincidence is to recognize that, perhaps for only a moment or two, God has peeled back the unseen in order to let you know that He’s got you covered.

“For I know well the plans I have in mind for you—oracle of the LORD—plans for your welfare and not for woe, so as to give you a future of hope.” Jer 29:11