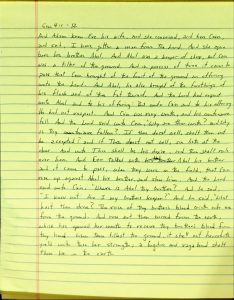 Whatever happened in this day of offering, one result is that Cain perceived himself as a victim. To Cain, God showed himself to be arbitrary – fickle. It was wrong of God to refuse his sacrifice. Cain felt that he did not deserve this. He naturally hated the wrong that had been done against him and so he lashed out in order to even accounts. He was justified, he believed, because he had clearly been wronged.

We all, I suppose, have experienced a similar moment. I have on many occasions since my youth heard myself say, “this isn’t fair!” In the twisted logic of an entitled outlook, every object has been prejudged with respect to how it affects me. Whatever I might encounter in my field, I know this much: the thing – whatever it might be – owes me something. This is the essence of what we call “entitlement”. Whenever I encounter a new thing, before I am even certain of what it is, I am already convinced that it exists to serve me. What’s more, its failure to serve me well is worthy of cursing and death.

He who gives an answer before he hears, it is a folly and shame Prov 18:13