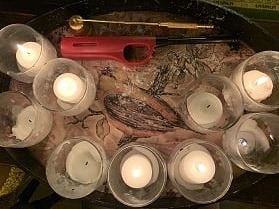 King Manasseh replaced King Hezekiah after his death. But Manasseh did not follow in his father’s ways.

Instead, he reinstituted idol worship throughout Jerusalem and the southern kingdom. Eventually, he was arrested and chained. During his imprisonment, he repented of his idolatry. And so, God restored him to his throne.

Manasseh repented from evil practices after a devasting loss of freedom and power. Yet, even though it took near ruin before his repentance, God still forgave him. And, God still had mercy on him.

So, maybe you’re like me. Sometimes I wake up in the morning feeling like I have let God down. “In my thoughts and in my words, in what I have done and in what I have failed to do…”

But what is even more real is the assurance that God is ready to forgive. In fact, He has already forgiven. So, take heart my soul. Your redeemer is never far away.