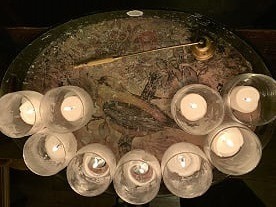 Against protocol, Esther risked her life. Though uninvited, she stepped into the king’s inner court. As a result, the king failed to immediately recognize her. And so, he glanced at the intruder with rage on his face.

Though courageous enough to approach, Esther was overwhelmed by the king’s awesome presence. In the overwhelm, she fainted. Once the king realized it was his queen, he rushed to Esther. He and other members of the court helped to revive her. But then, after speaking a few words, she fell faint again.

Days later and fully recovered; Esther returned to the inner court. And this time, the king received her with joy. He offered to honor any wish she made. And so, she requested that he and Haman come to a feast that she had prepared. And the king gladly accepted.

Both men enjoyed themselves immensely at the queen’s feast. And so, she asked once again if they would attend a second feast the next day.

Haman left the palace that day feeling deeply satisfied. However, on his way home he encountered Mordecai, who once again refused to honor him. And this bothered Haman so much that it spoiled his good mood.

Haman failed to see the abundance of blessings in his life. And this failure set him up for ultimate calamity.

I am so blessed in so many ways. And yet, it’s self-surprising how easily I can become irritated by minor inconveniences.

I need to cultivate an attitude and disposition of gratitude. I need to recognize, moment by moment, that God is the source of all goodness. And I need to trust that He has graciously provided for my every need.

“all good giving and every perfect gift is from above, coming down from the Father of lights, with whom there is no alteration or shadow caused by change.” James 1:17