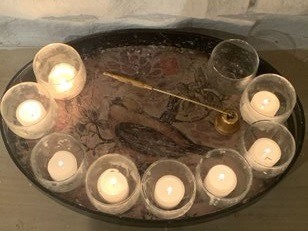 God Is the Escape From Evil

Psalm 9 begins with a reflection about God’s authority. King David observed how the Lord rules forever. And, those who trust in God are never forsaken. Though God is sometimes slow to act, he never forgets justice.

Most poignantly, David revealed a particular aspect of God’s wisdom. He said, “By the deeds they do, the wicked are trapped.”

Later in the Psalm, David lamented the foolishness of evil. Evil people believe that God doesn’t care about their behavior, or that He simply doesn’t exist. For this reason, they feel free violate God’s laws, and other people, with impunity.

God is the Escape From Evil

Evildoers become trapped by the evil they do. And King David says this is a manifestation of God’s wisdom.

So, when I do evil things, it makes it harder to avoid future evil. And the only thing that breaks this powerfully degenerative cycle is repentance. Jesus gave us the way.

So, humbly returning to God in the Word and the Eucharist breaks the degenerative cycle of sin and death. And by God’s grace, the church offers the sacraments for the life of God’s people.

“Take care, brothers, that none of you may have an evil and unfaithful heart, so as to forsake the living God. Encourage yourselves daily while it is still “today,” so that none of you may grow hardened by the deceit of sin. We have become partners of Christ if only we hold the beginning of the reality firm until the end. for it is said: “Oh, that today you would hear his voice: ‘Harden not your hearts as at the rebellion.’” Heb 3:12-15