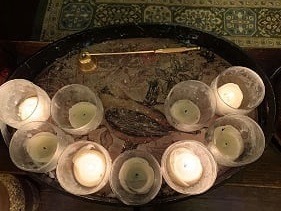 Ezra praised God for the favor he received from the King of Persia. And then he recruited other Israelite exiles to make the return trip with him. Many of these were priests and leaders in the community. And there, near the river, Ezra assembled the group.

Filled with the promise of returning to Jerusalem, Ezra attracted followers who risked safety and security for the unknown. These people had built lives in Babylon. And so, while they were filled with expectancy, they were also aware of the danger.

And yet, they followed Ezra anyway.

The principle reason I am reluctant to follow is the fact that I give up autonomy when I do. And the truth is, I like being in control. What’s more, I especially don’t like being out of control.

There is a certain delusion at work here. I tend to think that independence equates to freedom. When, in fact, it does not such thing. I don’t know the future. So, my sense of control is always an illusion.

Ultimately, freedom is found only when I temper my behavior in accordance with the leadership of the one who made me.

“But of that day or hour, no one knows, neither the angels in heaven, nor the Son, but only the Father.” Mark 13:32