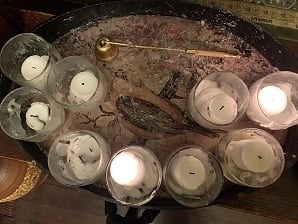 So, after defeating the Medes, the king sent Holofernes out with a large army to take vengeance on these nations.

Holofernes ripped through the west causing destruction everywhere he went. As a result, the people of the western nations were filled with dread.

The nations felt dread of Holofernes because of the destruction his army wrought. While each nation hoped they might somehow escape the destruction, the angst that his army might arrive anytime wore on the people.

For them, it was like knowing a tidal wave was coming yet having no ability to prepare nor any ability to alter the situation.

William Shakespeare once wrote, “”Cowards die many times before their deaths, the valiant never taste of death but once.”

Dread is the result of mentally dwelling outside of the moment. When I give my brain license to do whatever it will, it often will run to the future and dread. It will imagine one thousand ways that I will somehow fail in my future endeavors. And it will visualize in excruciating detail my suffering and humiliation.

My brain does this in order to cause me to avoid danger. And that is my brain’s job.

But I am not merely my brain. My brain is a physical organ that helps me to navigate the circumstances of life. Yet, when I am conscious, my “self” remains in charge.

“Do not worry about tomorrow; tomorrow will take care of itself. Sufficient for a day is its own evil.” Matt 6:34