Laban and the Servant 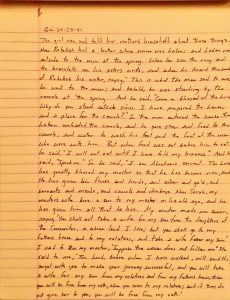 The servant can’t wait to know if Rebekah is the answer to his prayer. He is not willing to enter into Laban’s hospitality without knowing for sure. He presses the issue.

The certainty that comes with mission orders every other aspect of a person’s behavior. But not just the missionary’s behavior – all of creation seems to bend to the will of someone who is deeply committed. A strange miracle of cosmic proportion.

The servant has no hidden agenda. He lays his cards out on the table from the beginning. He won’t stop until he find his path. This is the way of a powerful life. 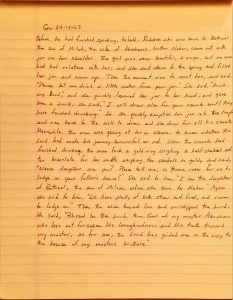 So the sign he asked for wasn’t arbitrary. He didn’t ask for her to be wearing a certain color, or that a dove should alight near her. He asked that the woman he was looking for would show kindness to a stranger. He did not go into the town center and announce his business – which given the obvious wealth of his master may have resulted in more candidates than he could have managed. Instead, he waited at the well for someone who would be kind to him, a stranger.

Rebekah was simply living her day. She was carrying water. She wasn’t on the lookout for some life changing opportunity that she could not have known existed. At the well, she did not owe Eliezer anything. Yet she extended not only the kindness he requested, but saw his need and watered his animals.

She saw him in his apparent need. She created value and offered it to him. Her only expected reward could have been running behind in her scheduled errand.

The stuff of election. Dispositionally, I like to think it falls out of the sky.   Rebekah was living it every day.

Don’t Take My Son Back There

Abraham knew something. If Isaac returned to Haran, then everything would be lost. The promise of the land would be void. The purpose of the wealth would be assimilated into another person’s dreams and aspirations.

The servant took no chances. If he was a hunter today, we would say he was “loaded for bear”. His retinue was large with obvious signs of his master’s wealth. To the servant, it seemed not unlikely this would be a hard sell – he was going to be prepared.

I suppose there is something to this. Every person lived long enough to think in terms of legacy wants that the fruit of their life’s work should not be squandered.

I suppose the lesson of the luwak is that even when the fruit is consumed, the seed remains. To a parent this is a lifeline. With Abraham, I’m still hoping they won’t go back.

Abraham and the Cave 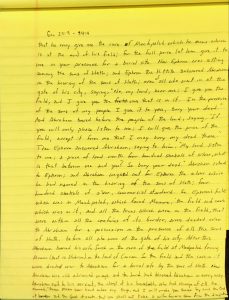 Abraham knew what he wanted.  The cave near Mamre, where he was living.  A permanent burial place for Sarah, for him and for his posterity.

The interactions between men of great wealth are interesting. I have found that rarely do they carry cash. In the words of the great technology industrialist Bill Gates, “Money has no value to me”. Men in these circumstances do not think of value in the same terms as most people who are tied to some monetary system in order to function.

Ephron was wealthy and Abraham was wealthy. Ephron didn’t need the money. Abraham could have accepted a gift.

But he didn’t. He persistently refused.

God had promised to give the very land they stood on to Abraham and his descendants. But Abraham didn’t interpret this offered gift as coming from God. He was intent on paying for this small piece of land.

It is a curious, delicate, thing to reject generosity. Abraham was similarly careful not to offend Ephron’s generous offer. Two determined men who were used to having their way. There was a lot in this moment that could have gone very badly.

Abraham knew how the world worked. Value exchange means never something for nothing. But the cave where he would lay Sarah could not come with strings attached – a favor that could be forgotten in a generation, or two. A public, legal transaction, it was an indisputable claim, a stake in the ground, for every generation to come.

This moment was the beginning of the end of the nomad way for Abraham and his people. A somber, humble beginning. 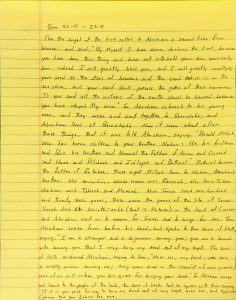 Abraham was a nomad. A wondering Aramean.

Nomads don’t have burial sites. I remember visiting an excavated burial pit in Arabia once. Thousands of years old. It was a round hole about 3 feet in diameter and 5 feet deep. The grave was for a man. His bones, once his body, was curled in the fetal position to fit within the circular confines of the hole. All of his personal possessions dropped on top of his body. Tools, identification, clothes. Covered over. Never revisited. It’s re-emergence the chance discovery of an excavator at a construction site.

He wanted a permanent place for his beloved in the land of their sojourn. A memorial. It is no small thing. 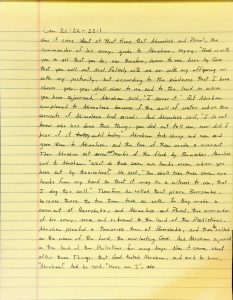 I am reminded that the stuff of the Spirit is always mixed with earth.

Water in dry and thirsty land. A well dug in the dirt. Abimelech shows up. Abraham has once before deceived him. He brings his army commander. He means business.

Abraham has the promise of God. God’s protection and blessing.

The temptation is real. Yet Abraham knows that to wait upon the Lord isn’t entitlement. There is work to do. He must enter into it.

I must enter into it. I must work with the world that must never be allowed to consume me.

It could have been an altercation. It was peace.

Hagar and Ishmael Sent Away 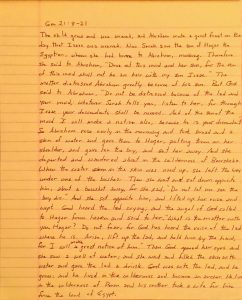 Abraham hangs a thread of hope on the shoulder of Hagar. He has known her. Together they have this half grown child together. His physical legacy to Ishmael and his mother is a skin of water.

And it won’t be enough.

In their lament, as Ishmael and Hagar wait to die, their cry is for more than desperate thirst.

But their salvation comes in water. An angel and water.

Yet this resurrection is more than physical. They also have met the living God who will lead and guide.

Water and life – and the knowing of the true God.

I once visited Arabia. There, a taxi driver said to me, “We are all sons of Abraham”. I smiled an agreement but at that moment I was skeptical.

Water and life – and the knowing of the true God. 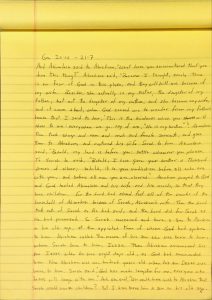 “All who hear of it will laugh with me”.   I’m always struck by this – laughter. Sarah doesn’t say she is filled with joy, although she clearly is. Her joy is effervescent. There is no keeping silent. No quiet reserve.

Today, Sarah has been vindicated in the community and her own sense of purpose has been fulfilled. God has done great things for her.

But the whole thing is ridiculous. The journeying. The false starts. The famine. Egypt. The endless string of promises and covenants. The holding fast. The devastation. The strange visitation. The fear. The advanced age. The anxious half-truths. The slave turned rival. Suddenly she laughs out loud. Somehow all of this is God’s way.

I catch hold of this as I drink in my coffee. I laugh and coffee chokes up through my nose. It burns and stings a little and my eyes fill with tears. 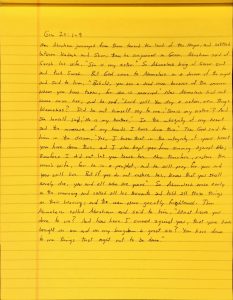 “She is my sister”

What kind of world this must have been, where a man had to worry that he might lose his life on account of the beauty of his wife. I live in a world filled with worry. I am not immune to it. But I’ve never felt the anxiety that someone might actually kill me in order to steal my wife.

Or maybe I have.

It’s a choosing against what’s actually given. It closes me down. I erect barriers to thwart the possibility that my anxiety hopes to avoid. I tell myself that it’s ok to lie – to protect myself. I look at others and see only threats.  They are robbers and murders. They are not people but specters and shadows that portend doom.   And I am thoroughly lost.

It doesn’t have to be like this. It never did. In each moment present Abraham was never in danger. And neither am I.

The Way of Lot

Lot is a challenge to me. He has made every appropriate decision in his life. One could almost say he was prudent. At the point where his wealth and Abraham’s wealth conflicted, he was given the choice: the valley or the hill country. He did not defer to Abram, and took for himself the best of the land. Self-interest guided him.   What else should he do? It was a reasonable decision.

He moved his family into the community of Sodom and when that community came to war, he was captured and enslaved along with his family. Rescued and restored by Abraham, he did not consider returning to the protection of his uncle, but returned to his former place in the community – his wealth and place intact. A prudent decision driven by appropriate self-interest.

We can’t say he was unrighteous – he unknowingly did well to entertain and protect angels. Prudence again.

In salvation from the destruction of Sodom, Lot escaped as one through a fire. Living in a cave, apparently believing that all had ended and they alone survived, his daughters surveyed the situation and made a reasonable decision driven by appropriate self-interest. They kept the line going. Like so often the case for their father, their plan worked. The exact outcome they hoped for was achieved.

But somehow it sticks – the offspring of prudence is incest? Something is not right. I did not chose this. No one would want this for a legacy. And so I ask the mirror – How do I so often find myself so far away from the person I intend to be?