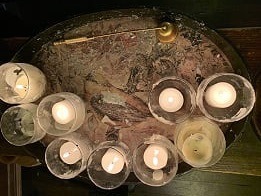 As a young man, the Assyrians exiled Tobit from Naphtali to the foreign city of Nineveh. Even so, he remained faithful to the Law of Moses in all things. And so, although he had initially done well serving in the court of the Assyrian kings, he lost most of his wealth remaining faithful during the persecutions. Although Tobit had lost his wealth, a well-to-do relative supported him by providing money and protection.

One night, in the midst of summer heat, Tobit decided to sleep outside. He found a place near a garden wall and lay down. Unfortunately, as he slept, sparrows that had perched above him dropped their dung in his eyes.

When he awoke, the dung had formed into white scales that impaired his vision. So, he went to physicians for help. However, each time a physician put any ointment on his eyes, the scales became worse. Finally, he became totally blind.

When Ahiqar, his relative moved to another town, his wife Anna took a job weaving cloth. She did well with her work. Once, after she had completed weaving some cloth, she went to deliver it. When she did, her employers gave her the full pay. Additionally, they were so pleased with her work that they gave her a goat as a bonus. But the goat became a point of contention between Tobit and Anna.

Tobit worried that the goat was stolen. And he feared that eating something stolen would break his commitment to God.

Anna was committed to excellence. The quality of her work caused

The Disposition of Excellence

Excellence has a compelling effect. When I experience excellence, no matter the circumstances, I want to reward it. I feel drawn to recognize and appreciate it.

I think this is because the commitment to excellence is transcendent. It reflects the essence of truth, beauty and goodness. It communicates to those who experience it harmony with all that is best in the created universe.

“Maintain good conduct among the Gentiles, so that if they speak of you as evildoers, they may observe your good works and glorify God on the day of visitation.” 1 Peter 2:12