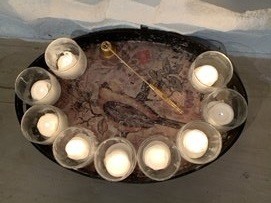 After King Antiochus Eupator ascended the throne, he appointed Gorgias as the governor of the region. Because of his past encounters with the Maccabees, he used foreign troops to attack the Jews.

At the same time, the Idumeans provoked the faithful Jews by welcoming fugitives. They also persisted in a guerilla war against Judea.

So Judas Maccabeus attacked them with his forces. And he routed them so that the Idumeans retreated to two large siege towers. The Idumeans had stocked the towers for a long siege. Still, some of the Idumeans bribed Jewish soldiers to let them escape out of the towers.

When Maccabeus heard about this, he tried and executed the guilty bribe-takers. And then he attacked the towers with a furious charge. In the end, he defeated the Idumeans. Nearly twenty thousand enemy soldiers perished.

After this, Timothy formed a large army made up of foreign troops. And with this army, he invaded Judea. Timothy’s army vastly outnumbered the Jewish army. And so, Judas Maccabeus went to the temple and prayed.

The next day, he attacked the larger army at dawn. After the fighting, soldiers from the foreign army reported seeing five angelic beings fighting for the Jews. Needless to say, Maccabeus routed Timothy’s army.

In the midst of battle, five angelic beings surrounded Judas Maccabeus. As a result, Timothy’s forces became aware that they were fighting against both heaven and earth. And this terrified them.

For Elisha it was obvious. He could see the angels around him. And David heard the sound of marching steps in the tops of poplar trees.

But how do I experience the consolation of protecting angels?

Perhaps a better question; How do I avoid taking them for granted?

“Are they [angels] not all ministering spirits sent to serve, for the sake of those who are to inherit salvation?” Heb 1:14